The past few days have been a whirlwind and in the quietness of Boxing day I have made time to reflect. Christmas day was the first spent with my whole family together. There was such an atmosphere of peace as I enjoyed sharing the day with everyone. 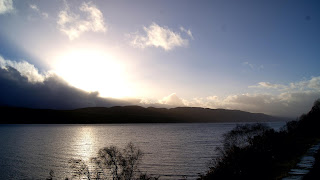 Inverness was an incredible trip and I am so glad Jason arranged it all for me. Before I left I felt this deep sense of importance surrounding this visit to Scotland. 3 years after the discovery of my family heritage in Scotland I finally had the opportunity to walk in my ancestor's footsteps. I had never been on an airplane before and was a little nervous about flying. Yet the experience was exhilarating, even though I found take off a little uncomfortable, I soon forgot as I gazed in awe at the views through the window. The vision before me was heavenly, we floated above a bed of clouds which sailed and danced around us. 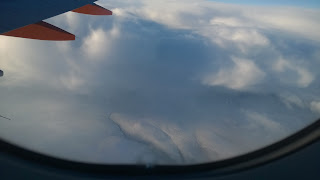 As we stepped off the plane the cold air bit through me and I was startled by the crispness of it. I knew at this point that I had not brought the right clothes for the weather! We had arrived in Scotland in the darkness so I had to wait till the morning before I could see anything. Our first day was spent exploring the local shops and the city of Inverness mainly because I wanted to see the big bookshop that we had discovered whilst researching the local attractions. The bookshop was so large that it took ages to look round and we spent most of the morning in there.

We had tried the telephone number of my family in Scotland just before we left and it had dialing tone. I had been hoping that they would answer so I could ask if we could meet up with them in Inverness as we were only staying an hour away. Yet they could not be reached before we left for Scotland. I did feel a small pang of disappointment but I didn't want this to stop me from believing in greater things. We had also tried to discover where my Nana was buried in Scotland in hopes of visiting her grave. When she died last year in January I had not really been able to feel anything. She had become a fleeting person in my life, no sooner had I found her was she gone. Yet we could find nothing about where she was buried.

On the second day of our trip we got up early and drove out to the Loch Ness which was breathtaking. I would have loved to go out onto the Loch in a boat which it was possible to hire but it was just too cold for me! As we continued driving we came across a castle called Urquhart castle. 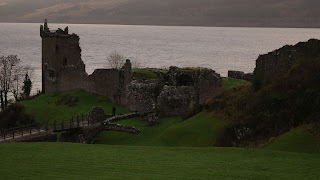 Jason loves castle so we decided to have a look around there. In that time the weather had changed and it started to pour with heavy cold rain. Another realisation- my coat was not waterproof!After getting very wet and cold we headed back for a hot meal at the hotel. Later on in the day we drove to Raigmore hospital where my Dad was born. To see the place where Dad was born filled me with such emotion and we started to pray. I had prayed at the Loch and prayed outside the hospital. 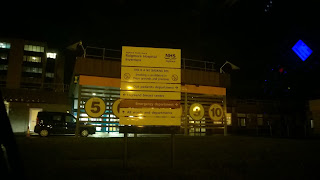 The very next day we awoke with a fresh determination to visit the Highland Archive office which we had seen on a signpost the day before. Within moments of visiting the Archive office we had the name of the cemetery and the location of her grave which was only 3 minutes away! I was in complete shock - finally we could go and visit her grave. I went to buy some flowers, beautiful pink tulips with gold leaves. Meanwhile the weather grew gradually worse and the rain became torrential. We hadn't long been at the cemetery before we found her name amongst the others. Seeing the words written before me I started to feel a bit choked and I grew irritable as I was trying to arrange her flowers. Jason asked me if I wanted to be alone and I realised then that I did. It wasn't long before tears came and pain filled my heart of the loss. Yet all I could think of was the loss between my Dad and her. How she was his mother but could never be his mother. Once again I prayed and came away from the grave feeling a whole lot lighter.

Our trip to Inverness felt as though it was a beginning and an end. Another chapter in the story and seeds sown in the soil of Scotland. There is growing and transformation in my life and I anticipate the new year because 2015 has been amazing! 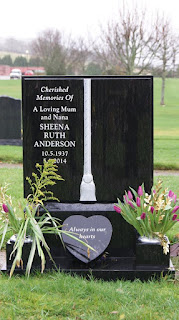