Stronger than the darkness...

A heavy cloud has been resting on me now these past 3 years since my diagnosis. Although I don't regret anything that has happened during those 3 years and have seen so much of God's goodness, I have felt the full weight of my choice. Sometimes it has been hard to see out of the storm of chaos and many times I have felt a grip on me stronger than flesh and blood. Since I stepped into the discovery of my family and the generational curse - I feel as though I have stepped into an enemy stronghold full of fear, darkness, shame and a war on the flesh and mind.

I began to suffer with an anxiety that clutched and squeezed the life out of me. It would take hold of me so unexpectedly and inject with me fear. So much confusion reigned in my life and only God could make things clear for me. He would show up with his giant torch to shine under the bed and check for monsters. He would reassure me that everything is okay. He would show me how I sadly believed a lie and would tell me the truth. Great peace would flood my soul and the fear retreated.

Yet the fear still continued to attack trying so many different tactics. Each time it was defeated it returned as though angered by God's victory. Its main source of attack is always related to my mutant DNA. Since my father came back into my life in April this year the attacks have grown more pointed. Yet over the summer this year God stirred up in my heart a longing for healing so strong. I began to believe, though it is deemed impossible in our physical world, that I would be healed. This wellspring of hope had become a shining light over the past few months.


When I started University in September I grew very busy with the work and assignments and started to feel a little weary and tired. Yet once again God intervened and charged me with new energy - in the form of hope. Truth opened out before me like a book. I could suddenly see myself from the position of an observer - I saw the darkness that was all around me. I saw how I had begun to hold my head in shame. How unworthiness seemed to seep from me. The beautiful place of my mind that God created had become polluted by dark and fearful thoughts. I had believed the lie that I am not 'me' anymore, like some Jekyll and Hyde creature I was slowly transforming into the mutant DNA that lies within me. My thought-life had become panicked and fearful. I was fighting to control my mind so strongly, so tightly because I was afraid of it, like it somehow wasn't mine anymore. I knew this was the work of the enemy attacking my identity.

The truth illuminated the darkness and confusion. Once again peace flooded me and hope filled my heart... 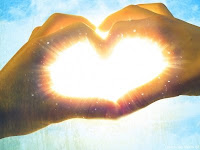 "So why would I fear the future? For I'm being pursued only by Your goodness and unfailing love..."  ~Psalm 23.